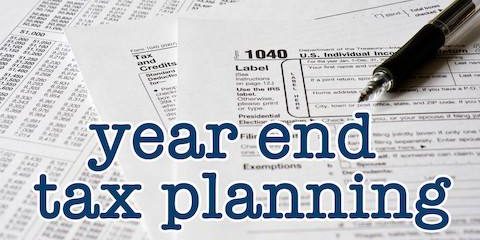 As the end of the year approaches, it is a good time to think of planning moves that will help lower your tax bill for this year and possibly the next. Factors that compound the planning challenge this year include political and economic uncertainty, and Congress’s all too familiar failure to act on a number of important tax breaks that will expire at the end of 2016.

The article below outlines some of the expiring tax breaks.

As the end of the year approaches, it is a good time to think of planning moves that will help lower your tax bill for this year and possibly the next. Factors that compound the planning challenge this year include political and economic uncertainty, and Congress’s all too familiar failure to act on a number of important tax breaks that will expire at the end of 2016.
Some of these expiring tax breaks will likely be extended, but perhaps not all, and as in the past, Congress may not decide the fate of these tax breaks until the very end of 2016 (or later). For individuals, these breaks include: the exclusion of income on the discharge of indebtedness on a principal residence, the treatment of mortgage insurance premiums as deductible qualified residence interest, the 7.5% of adjusted gross income floor beneath medical expense deductions for taxpayers age 65 or older, and the deduction for qualified tuition and related expenses. There is also a host of expiring energy provisions, including among them: the nonbusiness energy property credit, the residential energy property credit, the qualified fuel cell motor vehicle credit, the alternative fuel vehicle refueling property credit, the credit for 2-wheeled plug-in electric vehicles, the new energy efficient homes credit, and the hybrid solar lighting system property credit.
Higher-income earners have unique concerns to address when mapping out year-end plans. They must be wary of the 3.8% surtax on certain unearned income (dividends and capital gains) and the additional 0.9% Medicare (hospital insurance, or HI) tax.
The surtax is 3.8% of the lesser of: (1) net investment income (NII), or (2) the excess of modified adjusted gross income (MAGI) over an unindexed threshold amount ($250,000 for joint filers or surviving spouses, $125,000 for a married individual filing a separate return, and $200,000 in any other case). As year-end nears, a taxpayer’s approach to minimizing or eliminating the 3.8% surtax will depend on his estimated MAGI and NII for the year. Some taxpayers should consider ways to minimize (e.g., through deferral) additional NII for the balance of the year, others should try to see if they can reduce MAGI other than NII, and other individuals will need to consider ways to minimize both NII and other types of MAGI.
The 0.9% additional Medicare tax also may require year-end actions. It applies to individuals for whom the sum of their wages received with respect to employment and their self-employment income is in excess of an unindexed threshold amount ($250,000 for joint filers, $125,000 for married couples filing separately, and $200,000 in any other case). Employers must withhold the additional Medicare tax from wages in excess of $200,000 regardless of the employee’s filing status or other income. Self-employed persons must take it into account in figuring estimated tax. There could be situations where an employee may need to have more withheld toward the end of the year to cover the tax. For example, if an individual earns $200,000 from one employer during the first half of the year and a like amount from another employer during the balance of the year, he would owe the additional Medicare tax, but there would be no withholding by either employer for the additional Medicare tax since wages from each employer don’t exceed $200,000. Also, in determining whether they may need to make adjustments to avoid a penalty for underpayment of estimated tax, individuals also should be mindful that the additional Medicare tax may be overwithheld. This could occur, for example, where only one of two married spouses works and reaches the threshold for the employer to withhold, but the couple’s combined income won’t be high enough to actually cause the tax to be owed.
We have compiled a checklist of additional actions based on current tax rules that may help you save tax dollars if you act before year-end. Not all actions will apply in your particular situation, but you (or a family member) will likely benefit from many of them. Please contact our office to schedule a tax planning meeting so we can narrow down the specific actions. In the meantime, please review the following list and contact us at your earliest convenience so that we can advise you on which tax-saving moves to make:
Year-End Tax Planning Moves for Individuals

Year-End Tax-Planning Moves for Businesses & Business Owners
Businesses should consider making expenditures that qualify for the business property expensing option. For tax years beginning in 2016, the expensing limit is $500,000 and the investment ceiling limit is $2,010,000. Expensing is generally available for most depreciable property (other than buildings), off-the-shelf computer software, and qualified real property-qualified leasehold improvement property, qualified restaurant property, and qualified retail improvement property. The generous dollar ceilings that apply this year mean that many small and medium sized businesses that make purchases before the end of 2016 will be able to currently deduct most if not all their outlays for machinery and equipment. What’s more, the expensing deduction is not prorated for the time that the asset is in service during the year. This opens up significant year-end planning opportunities.
Businesses also should consider making expenditures that qualify for 50% bonus first year depreciation if bought and placed in service this year. The bonus depreciation deduction is permitted without any proration based on the length of time that an asset is in service during the tax year. As a result, the full 50% first-year bonus writeoff is available even if qualifying assets are in service for only a few days in 2016.

Can an Owner of Rental Real Estate Qualify as a Real Estate Professional?
September 21, 2018

2017 Tax Reform: Business Tax Changes in the “Tax Cuts and Jobs Act”
January 26, 2018
Search
Categories
Do QuickBooks® with us!